To finish off the About Head section of my blog (for now), here are my top Superhero picks.

a) Firestorm and The Atom (Ray Palmer) - Tied for number one.
Firestorm - My first experience with Firestorm was probably the Superfriends cartoon of the early/mid 80's.  Even then, I thought he was pretty cool.  I then came across him in back issues of old JLA (Justice League of America) comics from the late 70's, early-mid 80's.  Something about the dual nature of Firestorm intrigued me.  For those that don't know, the early Firestorm was made up of two dudes.  Ronald Raymond (a high school jock) and Professor Martin Stein (a Nobel Prize-winning physicist).

In Firestorm, The Nuclear Man #1 (from 1978), young Ronnie Raymond joins a nuclear protest movement (to win the affections of a young lady (named Doreen Day)).  He breaks in to a nuclear power plant with the group only to learn that their goal is to cause the plant to explode (to show how bad nuclear power is).  When Ronnie hears this, he attempts to stop them, but is knocked out by the leader for his troubles.  Seeing the trouble on the monitors, Professor Stein rushes to where the bad guys are and threatens to call the cops if they don't leave immediately.  Knocking Stein unconscious (seems to be a pattern with these yahoos), they leave the two next to the bomb.  Ronnie (the young buck he is) awakens and tries to drag the unconscious Stein away, but alas he's not quick enough, as the bomb goes off, fusing the two together.  Ronnie being the controlling body and Martin Stein the disembodied voice that guides young Ronnie.  Firestorm's first series only ran 5 issues before dying in the DC Implosion.

In 1982 (after a stint in a back up feature in Flash and appearances in JLA) Firestorm is graced with a second series (which lasted a full 100 issues, plus several annuals).  In this second series, Ronnie and Martin will go on to have great adventures for the next several years until around Nov of 1987, when the "Firestorm Matrix" changes with the addition of Russian Mikhail "Pozhar" Arkadin.  This is known amongst fans as the "Blank Slate Era" as a amnesiac Professor Stein is in control of the Firestorm body with Ronnie and Mikhail being the disembodied voices.  Firestorm is then in constant flux for the next couple of years, becoming an Elemental and eventually kicking Mikhail and Ronnie out of the matrix, leaving Martin Stein as Firestorm, the Fire Elemental (in the last issue of his series #100).

Firestorm goes through several more changes, but as I see this is starting to turn in to a Firestorm-centric post, I'll leave off there.  Maybe in the future, I'll cover him more in depth.  Also, for more Firestorm goodness, check out the Firestorm Fan site (firestormfan.com).  The site is ran by a cat name Shag (aka Shagg aka Shaggg) who also has an awesome Firestorm podcast (The Fire and Water Podcast... the Water part is Aquamancentric).   Due to Firestorm's latest series being cancelled, currently Shag is reviewing the 2nd Firestorm series (from the 80's).  I think Shag is doing a fantastic job reviewing this wonderful series.  I encourage anyone interested in learning more about this era of Firestorm to check out the Fire and Water Podcast.

Firestorm and The Atom

The Atom - Over the years there have been several heroes using the name The Atom:  Al Pratt (the original), Paul Hoben, Adam Cray, Ryan Choi, and Rhonda Pineda.  But my favorite Atom of all is the 2nd one.  The Silver Age Atom.  Dr. Raymond Palmer, Phd.
Ray Palmer debuted as The Atom in Showcase #34 (back in 1961).  Ray Palmer used a fragment of a white dwarf star to miniaturize himself and become the hero known as The Atom.  Ray can shrink himself down to subatomic levels and uses his powers and intelligence to fight crime (mostly in his home city of Ivy Town (somewhere in New England)).  He ran in his own series from '62-'69 (the last year sharing the title with Hawkman).

I discovered The Atom while he appeared in the JLA.  The first solo stories I read was a mini series in the mid-80's called The Sword of the Atom.  Then in '88, he got his own series once again called The Power of the Atom (which only ran for about a year and a half).

Again, The Atom is another character I may go in to more detail on later.  For now, let's move on to...

b) Hawk and Dove - I haven't read much of the Hank and Don Hall appearances, just a few here and there.  Though I've recently acquired a handful of  their older issues, which I'm going to read through.  But the Hawk and Dove I read and am familiar with, is the Hank Hall and Dawn Granger version.  Hawk (Hank Hall) is an avatar for Chaos and prefers to settle things with his fists.  Dove (both Don Hall and Dawn Granger) is the avatar for Order and prefers to think things through.  Hank and Dawn (and Don) transform in to their alter-egos when danger is near by.  The original Dove (Don Hall, Hank's brother) died during the Crisis on Infinite Earths, while saving a kid from a collapsing building.  Dawn Granger appeared several years later (in real time) in the new Hawk and Dove mini-series.  Here we find out (via flashback), that at the same time Don died, Dawn received her powers.  The mini-series gets these two heroes together as a team, which then leads in to a wonderful (in my opinion) series, which ran 28 issues.
I believe this series ran in to issues (again, it's been over 20 years since they came out) when DC decided to make Hawk the big bad villain Monarch of the series Armageddon 2001, instead of Captain Adam (as fans guessed ahead of time).  Again, that last sentence is what I've heard from others, nothing from DC directly, so it could be inaccurate.

Anywho... definitely a must read (in Head's opinion) (even though, I believe, Rob Liefield supplied the art for the mini-series.).

c) Blue Beetle and Booster Gold (Ted Kord version of Beetle) - Blue Beetle and Booster Gold.  The ole Blue and Gold.  They each started off in their own series (bought by DC from another company).  Eventually the two wound up in the Giffen/DeMantis Justice League comic.  Their wacky hijinks quickly rocketed them to the top of my favorite list (even though DC has killed off Ted in favor of their more PC version Jaime Reyes).  Not sure which of Blue and Gold I like better, but they're both pretty damn awesome.

Booster Gold and Blue Beetle
(aka Blue and Gold)

d) The Flash (either Barry or Wallly) - When I started reading the Flash, I started in the low teens of Wally's series (the third Flash).  But from the old Superfriends tv show and JLA comics, I knew the prior Flash (the second one) was Barry Allen.  So once I got collecting comics, I went back and bought back issues of Barry's series.  It appears that about 2 years before the end of his comic (and he goes off to die in the Crisis (Spoilers sweetie)), Barry Allen (aka The Flash) killed Professor Zoom (aka Reverse Flash) to protect Barry Allen's fiance (Fiona Webb, whom Zoom was attempting to kill on Barry's and Fiona's wedding day).  Knowing that they were going to end his series, the last two years of his book consisted of his trial for killing Reverse Flash.  In issue 350 (the last issue), Barry finally (after being found Not Guilty) went off in to the future to live with his previously deceased ex-wife (Iris Allen) (that in itself is a long story).

Anyway... long story shor... well, not short... but not quite as long, the Barry Allen Flash is in one of my top spots.

Reverse Flash and The Flash

e) Animal Man - I always liked Animal Man (the few appearances I saw him with the Forgotten Heroes, usually in a Superman comic), but he definitely moved in to one of my top spots after Grant Morrison's run on Animal Man (which first appeared in Sept of 1988).  If you haven't read it yet, go find his run and read it (I believe it's available in trades).  This series explored Buddy's family life while trying to cope with being a super-hero. 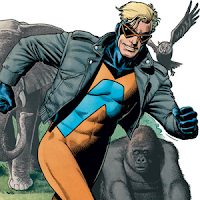 f) Green Lantern (Kyle followed by Hal) - My first Green Lantern was of course Hal Jordan.  I watched him on the Superfriends and when I started reading comics, he was Green Lantern (with John Stewart and Guy Gardner as back up roles).  But the Green Lantern I like best, is Kyle Rayner, who flew on to the scene in 1994 after Hal went apeshit crazy and tried to remake the universe after his hometown of Coast City was wiped out.